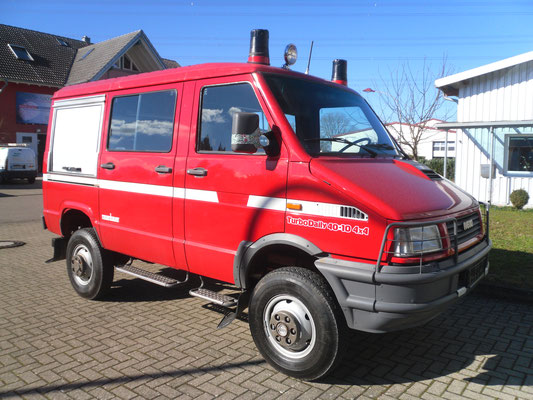 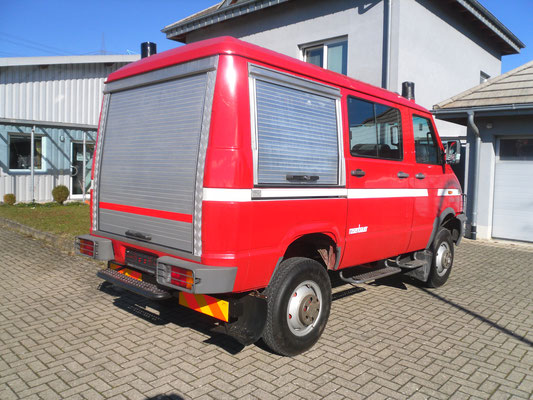 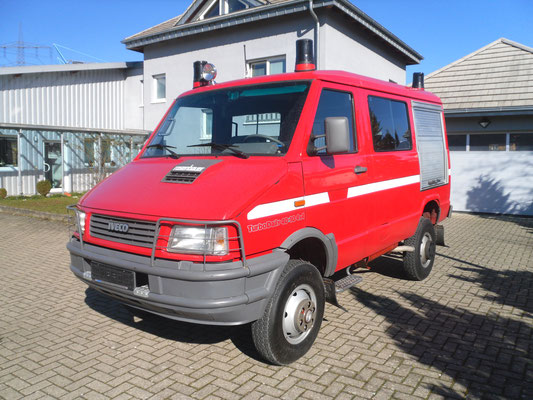 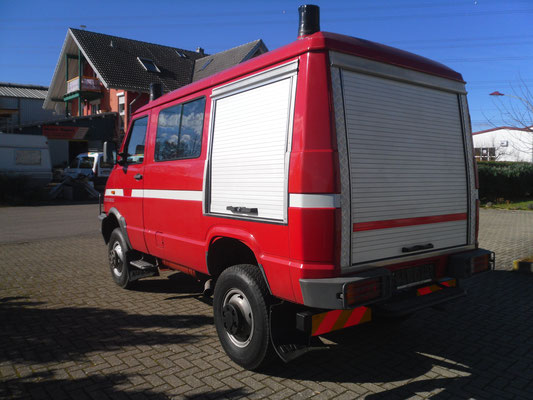 Following a trip through Morocco in 2012 we decided to sell our VW T4, and look for something a little larger so that we could have a bed in it which did not have to be made every night by folding down the rear bench seat.

The list of must haves soon grew and grew. A separate seating area in case of bad weather and a table to eat at. High enough to stand up in. A fridge and last but not least it had to be a 4X4. The nice to have list was no shorter. If possible under €10,000, no rust, low mileage, plenty of storage, max 3,5 tonnes, a cooking surface, sink, shower tub, hot pressurised water and of course leisure batteries with DC, AC and solar charging.

We searched for two years and then eventually found an ex fire brigade Iveco that was affordable and filled the no rust low mileage criteria. The rest we would have to fix ourselves. 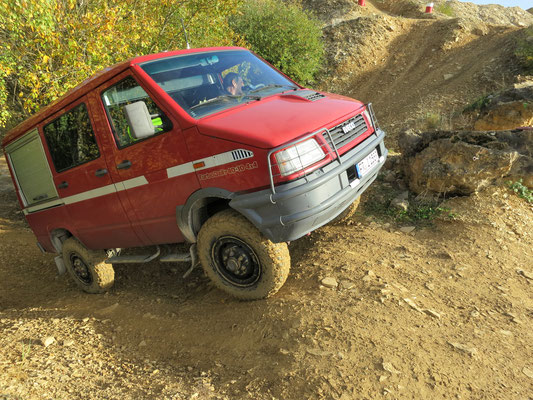 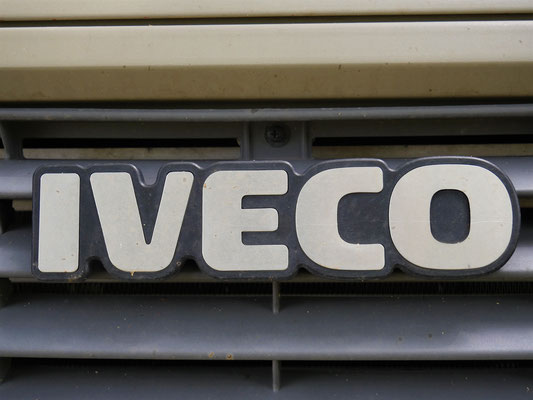 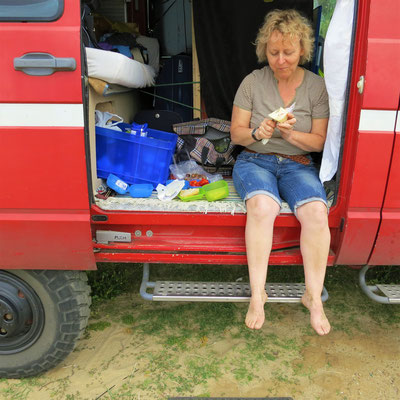 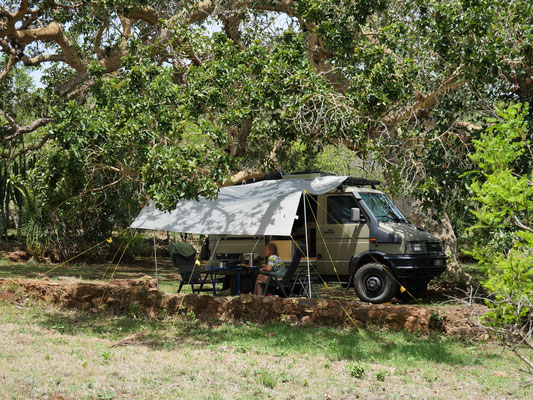 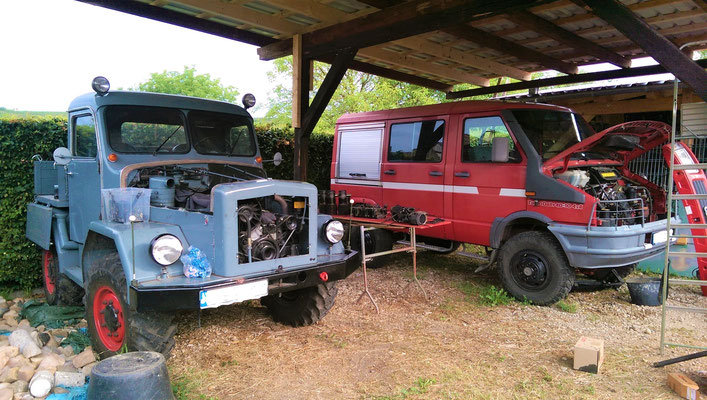 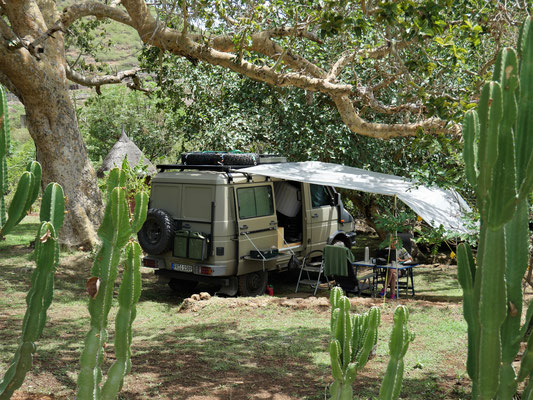 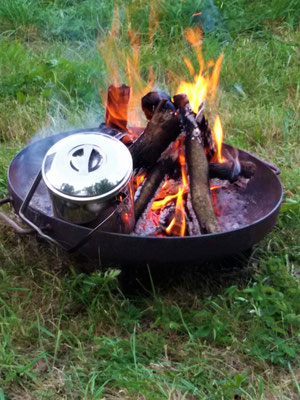 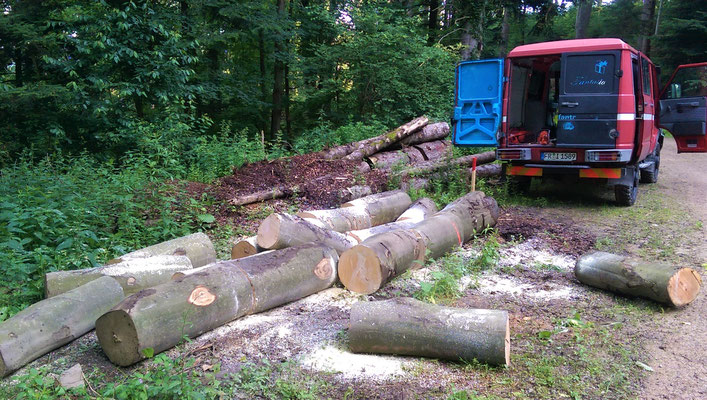 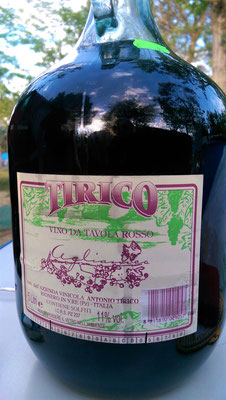 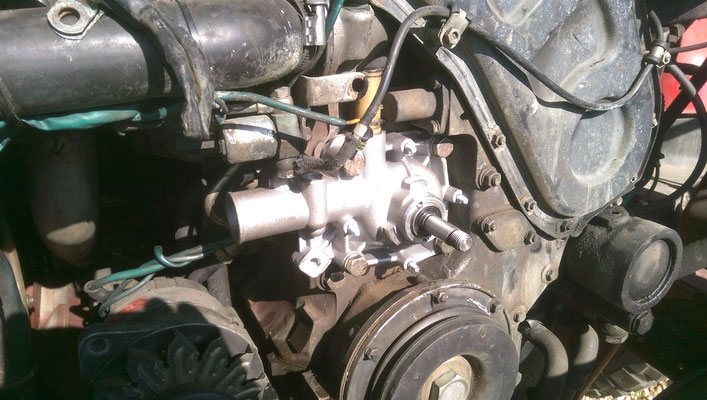 The van has part time four wheel drive which is mechanically engaged  via an additional gear lever from 2N (two wheel drive, the rear axle) to 4N, four wheels. The front axle is then driven via the transferbox.  This can be done whilst driving at a low speed and without using the clutch.  A lamp on the dash shows when 4N (=4H) is engaged and a warning lamp lights up if the speed exceeds 35 kmh. Driving faster, will damage the gears.

The front wheels have locking hubs which are manually engaged using a key. Unlocking the hubs when in 2N (=2H) reduces wear and tear and saves fuel.

In order to engage low range the vehicle has to stop. The lever is put into 4R (=4L) and another lamp on the dash (a Tortoise) lets us know where we are. When things get steep using crawler gears is just marvelous. A fourth lever position F (=N) is the auxilliary drive, used for winching etc.

The rear differential can be locked, again mechanically using a designated lever and on the dash yet another lamp indicates the fact. Some vans were given a front differential lock with an electrical switch but unfortunatly we don't have one. I only use the diff lock to get out of real trouble. 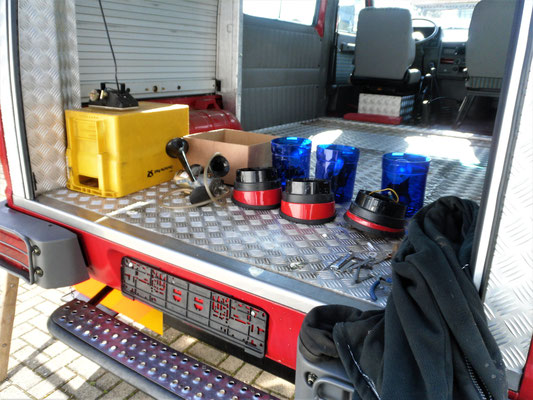 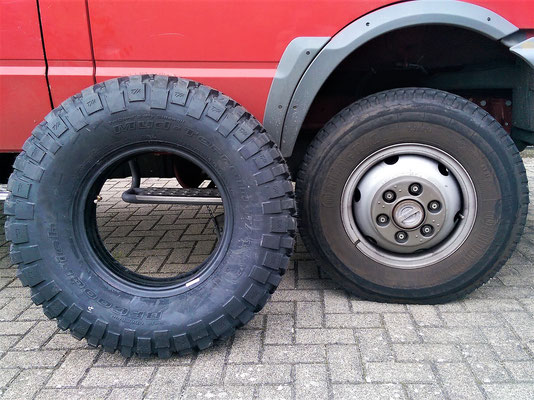 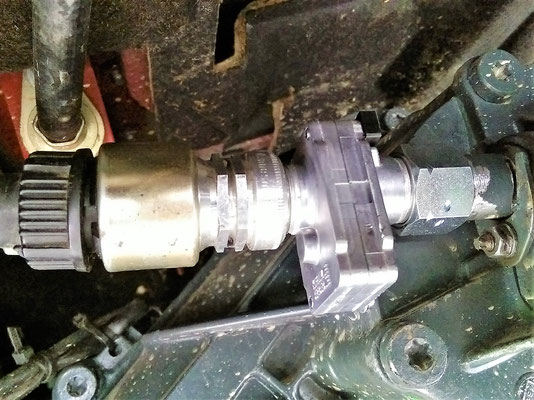 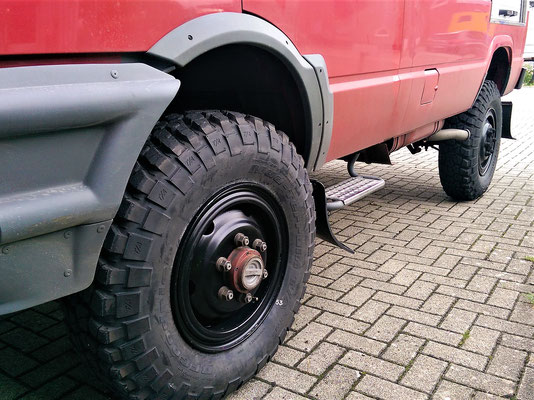 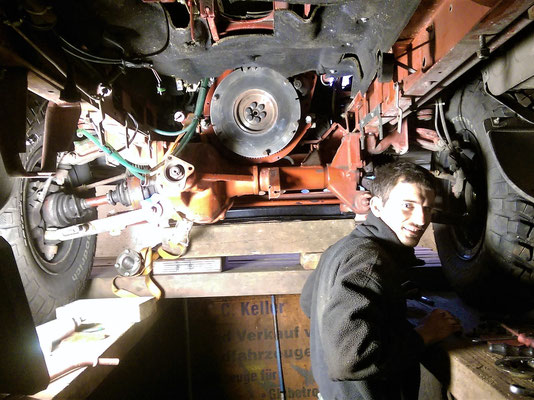 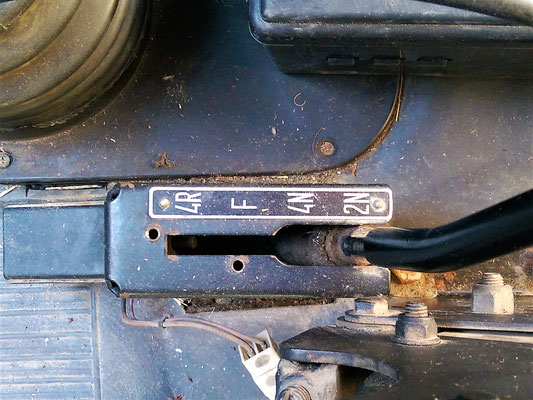 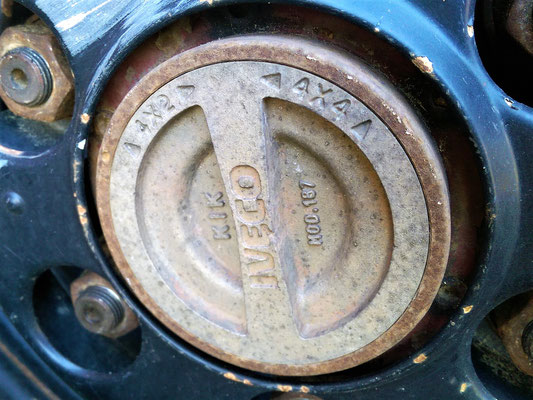 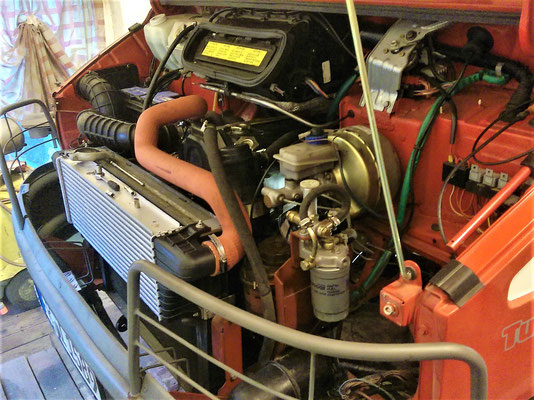 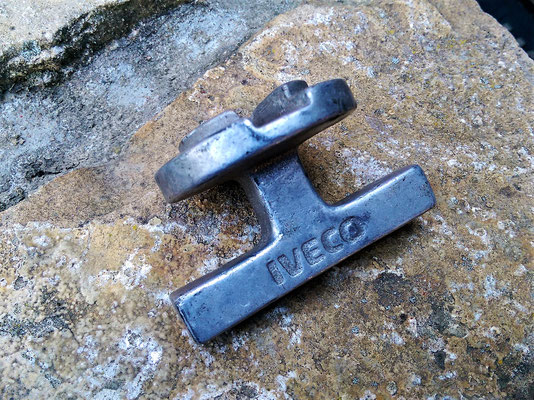 Before we could even think about converting the van to a camper we had to sort out a few modifications  to improve its onroad performance which was pretty dismal. We will be driving through Africa and a whilst a 4X4 is a must, a lot of mileage will be done on roads and so the van has to tick the long distance touring boxes aswell .

As it came the van was definitly underpowered.  I could get 100 kmh out of it at a push, with lots of noise and high revs. Driving up or downhill on the Motorway with an angry HGV in the back of one's neck isn't fun and overtaking anything, next to impossible. In 1996 Iveco gave the second generation vans a facelift and a 2,8 ltr version was introduced, but fitting the 2,8 ltr engine would have been far too expensive. We opted instead for an intercooler, which we were told should deliver around 10 to 12 PS more, some even say 15, and a new wheel set up.

The intercooler was installed at our Iveco specialists in Bavaria along with a new clutch and a larger flywheel so that the van could cope with it.

Then the  old wheels (7,50 R16 tyres, tubes and 5,5 inch split ring rims) were replaced. The new BFG MT 255/85 R16 tyres are rated 80% offroad, 20% onroad. I would have prefered AT tyres which are rated at 50% / 50% but they a are not available in that size. The BFGs have a higher sidewall and thus a larger circumference so that the wheel travels farther each turn, which in turn, now gives us more speed and lower engine rpms. An adaptor was then fitted to the sensor coming out of the transferbox to recalibrate the speedometer.

I decided to stick with the split ring rims. Its reassuring to know that in the bush you can get yourself out of at least that sort of trouble by yourself. We needed 6,5 inch rims for the larger tyres and chose the heavy duty semi drop centre rims with the separate continuous side flange ring and split locking ring, that were mounted on the military versions (Iveco VM). Our tubes and flaps are from Kabat. The tyre itself is a tubeless type, but this set up works well, as long as the inside is meticulously clean, and we're not the only ones using it.

The van has been downrated to 3500 KG which makes it cheaper to run. The downside of that is having 550 Kg less payload (theoretically) 😎