At the airport in Eldoret we finally had our passports stamped and were now legally in the country. Nairobi was just round the corner and so first of all we decided to have the van sorted out at the Jungle Junction, a well known overlander campsite and workshop. A very wise person once said “If it ain’t broke, don’t fix it” 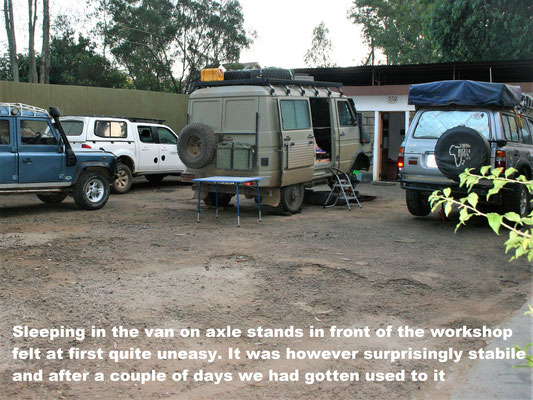 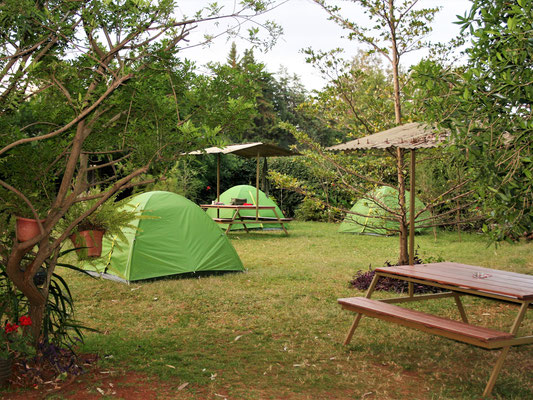 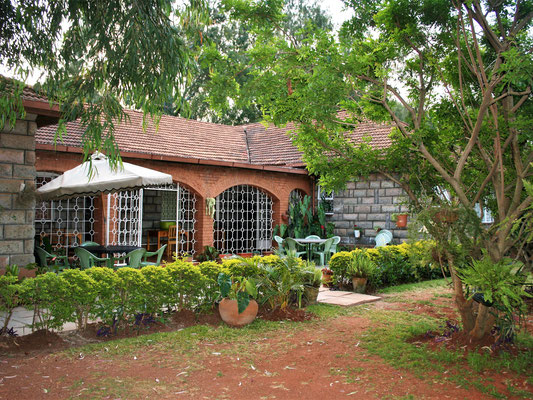 The van had taken a fair bit of punishment during the last few weeks. The sand was everywhere and we needed a good clean out. One of the jerry can holders had broken (we had it welded in Lodwar for 300 Shillings), the bonnet clamps had gone, and I was very concerned about the brakes on the front right wheel which were squeeking, smelling and smoking exessively after every long descent. 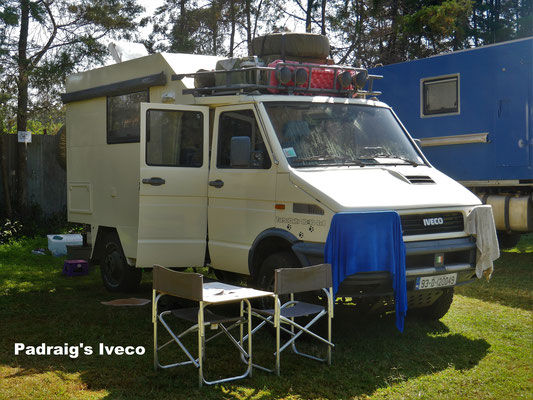 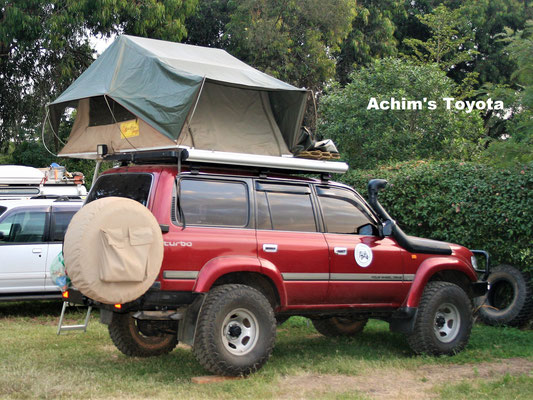 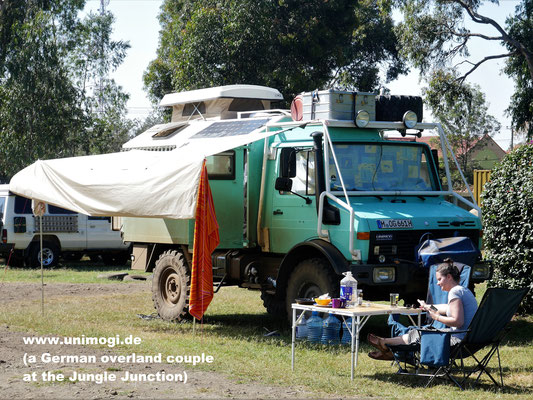 Surprise surprise another Iveco was there. I hadn’t expected that. I’ts  owner Padraig and I had some very interesting Iveco sessions over the next couple of days. Not only the brakes were playing up, one morning whilst lying under the van with Padraig, "yer man" said, “yer boots are gone”. They were indeed. One thing seems to lead to another and having the van sorted out turned into a very annoying and very expensive ordeal. Fortunatly we enjoyed excellent company during our stay which considerably helped the time go by.

We arrived on a Wednesday evening and on the following Monday the van was jacked up and looked at. Chris then fell his verdict, new boots, new pads and while we’re at it, we might as well have the disks skimmed. The boots were obviously damaged. Three of the four had holes and we were losing grease. I had the spares so nothing had to be ordered and replacing them wouldn’t take long. Chris saw signs of wear and tear on the pads including a slight nick on the front right hand side which, he said, must have been the cause of our brake problems.

There seemed to be inclusions in the compound which shouldn’t be there and which were causing slight grooves in the disks which Edward (his mechanic) and I didn’t really see. It wasn’t apparently “that” bad and we could live with it till we got back. The pads were still quite thick. However, as I had new pads with me as well, Chris said that if he were me, he would have them done. It wouldn’t take long and would be much cheaper than back home. I wasn`t sure what to do and not being a mechanic opted to follow his advice. The only thing that would take a day longer would be having the discs skimmed because he couldn’t do that himself.

Late that afternoon everything had been taken apart and the discs were collected by a courier. On Tuesday the boots were replaced which took most of the day, a little longer than anticipated, according to Chris, due to the fact that Edward had never done an Iveco before, which I thought very reassuring. At about knocking off time the discs arrived. On Wednesday the discs and pads were mounted on one side and work begun on the other. Around midday on Thursday the job was done and we went for a short test drive. 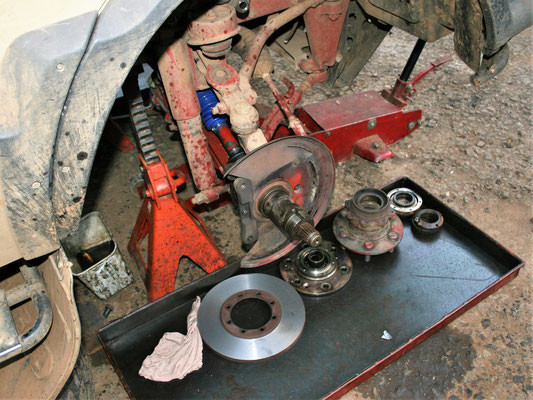 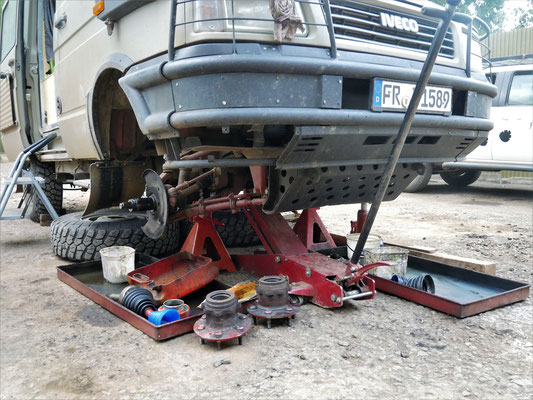 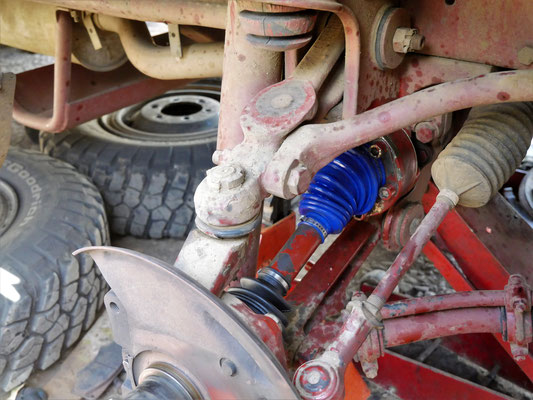 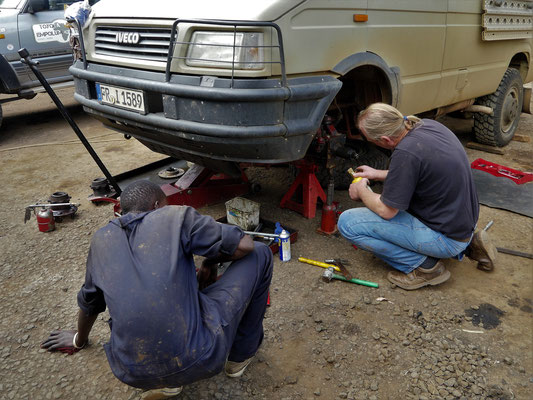 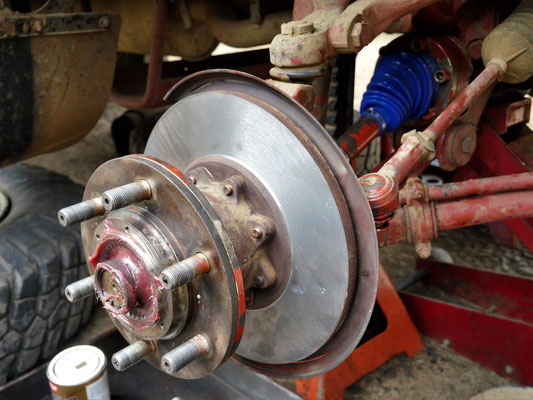 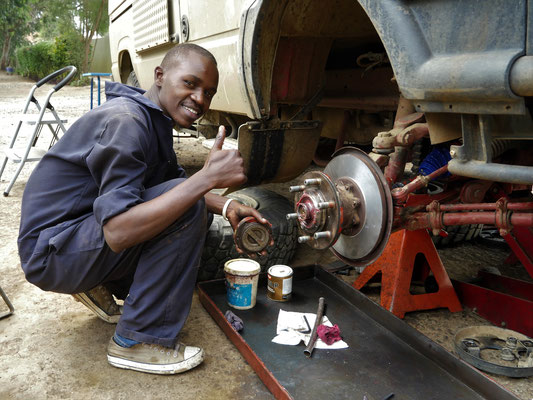 Alas, we now had a new problem. The pedal moved back and forth whilst braking!!! Chris had a go and admittedly something was wrong. The rest of the day was spent taking the discs off again and measuring them (perhaps they should have been measured prior to remounting them). The result was that they had not been eavenly skimmed but that the numbers were within the tolerance level, that I would have to live with it, and added that he would.

I then began to lose my patience and said that I wouldn’t, that I couldn’t, that it wasn’t like that before and that I wasn’t having any of it. Chris then said that if that were the case he would have to have them skimmed again at his own expence to which I replied that I certainly wasn’t going to pay twice and that it was his job to come to an agreement with the skimmer, not mine. Chris then said he would remount them again, just to make sure that Edward hadn’t overseen anything, before sending them back.

On Friday Edward remounted everything and every now and then Chris came and had a closer look. Edward knew how to do it this tme and was finished at noon. Chris and I went for another drive and reluctantly he agreed that the discs would have to be redone. Edward then took the discs off a third time and a motorbike courier came to take them once more to the skimmer.

On Saturday they were brought back, the uneavenness measured at less than 0,15 mm and remounted. Chris was a little uneasy as we drove off for the next test drive. And so was I. This time though, all seemed well. The brakes were still squeeking but neither of us mentioned it. The following morning we were glad to say goodbye to Nairobi.