The Queen of Sheba

Beyond Amhara north of the Simiens lies Axum (Aksum) the capital of Tigray and probably the oldest continuously inhabited city in Sub-Saharen Africa. Reputedly the home of the Arc of the Covenant and that of the Queen of Sheba.

Axum is a UNESCO World Heritage Site. It's origins are obscure. The Pre-Axumite or Proto-Axumite polity of D'mt (10th to 5th centuries BCE) at Yeha near Axum and that of Sheba at Ma'rib in Yemen were very closely associated. Symbols of the Sheban Pantheon, notably Al-Maqah (disc and crescent) and Attor (Ibex) are both found at Yeha and upon the Stelae in Axum. Certain is that the Old South Arabian script, in which Sheban, amoung other languages was written, was the predecessor of Ge'ez. And whilst to date there is no historical or archaological evidence that Makeda, Bilqis or the Queen of Sheba ever existed, her mention in the Kebra Nagest, the Quran and the Bible is compelling.

The so called Axum Obelisk is the second highest stele in the northern field. It measures 24 meters, weighs about 160 tons and has a false door with 10 storeys showing windows on all sides. At the top a crescent (the Moon) and a disc (the Sun) symbolizing the old deities can be seen. Recesses in the stone suggest that they may have been adorned, perhaps with gold. It was looted by the Italiens in 1937 and carried off to Rome in a ship called, ironically enough, the Adua (At the battle of Adwa 1896, the Italiens suffered a crushing defeat which practically ended the first Italo-Abyssinian war). In 2005 it was returned to Ethiopia and reerrected.

The third large and supported stele, the so called Ezana Stele has a false door and 9 window storeys and is 21 meters high. At the top the recesses indicate that there may have been a crucifix on one side and a cross of St Andrew on the other (according to our guide). Interestingly, the back of the Ezana Stele has no reliefs at all. 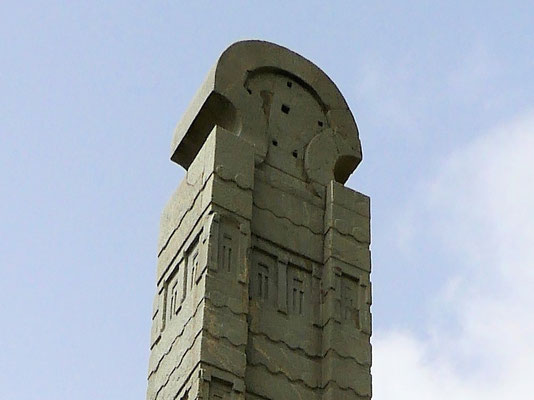 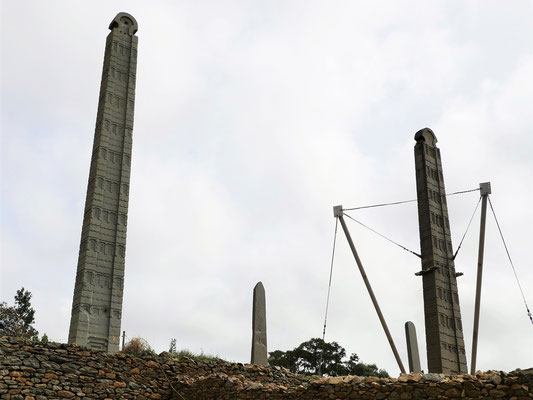 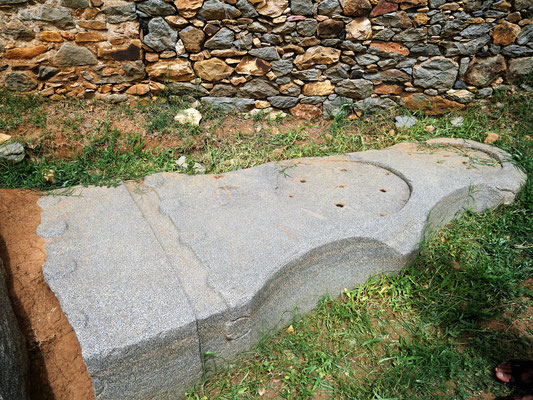 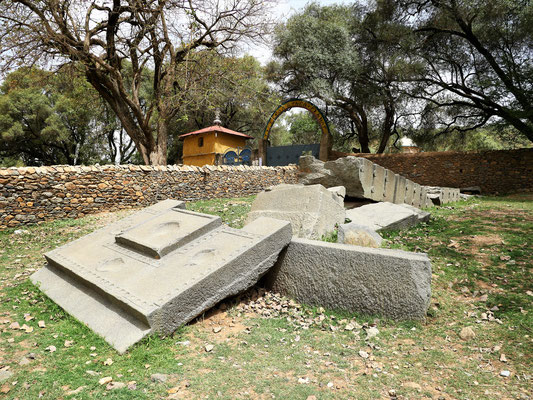 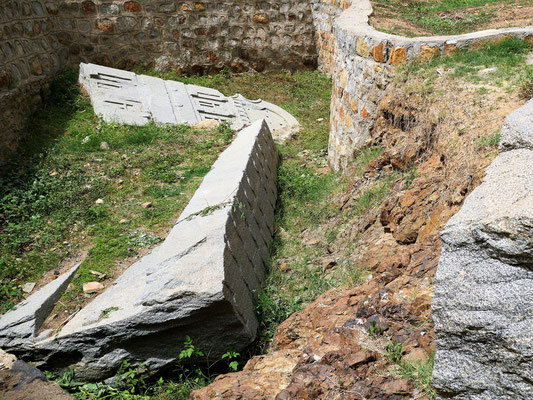 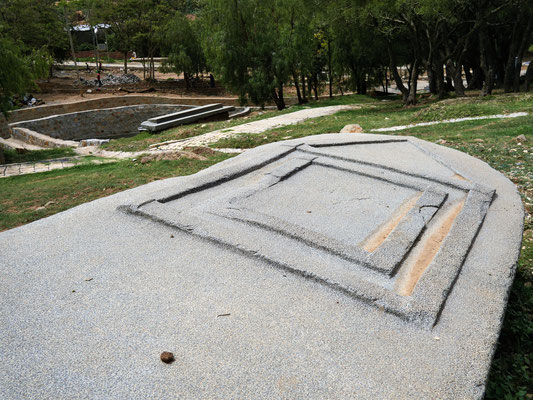 The largest and heaviest of the Stelae, the so called Fallen or Great Stele, would have been 33 meters high when standing, surpassing even the largest Egyptian obelisk and weighed an estimated 520 tons. It is thought that it fell whilst being errected or shortly afterwards. Ibex reliefs can be clearly seen on the sides. It has a false door and 12 storeys with windows. It is attributed to King Remhai. The tombs beneath it are open to the public. Unfortunatly we could'nt see the Ezana Stone (inscribed in Greek, Ge'ez and Sheban) which is not far away because they were apparently closed. 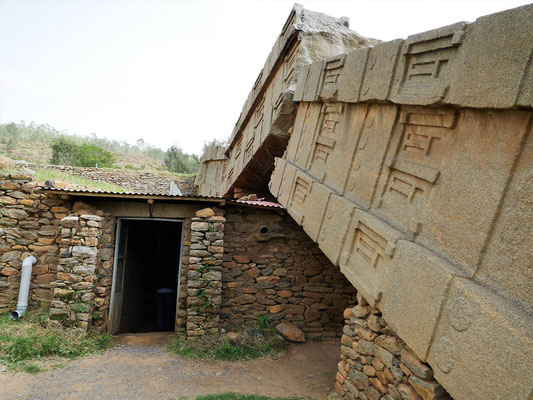 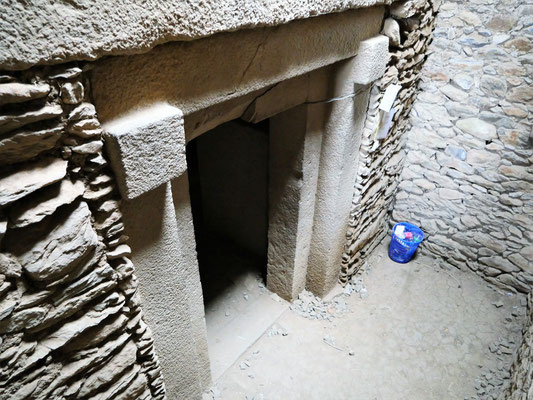 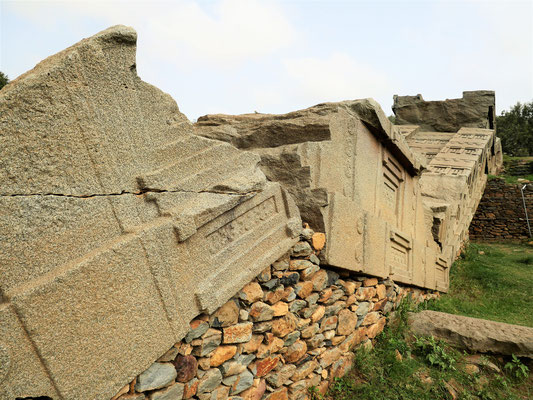 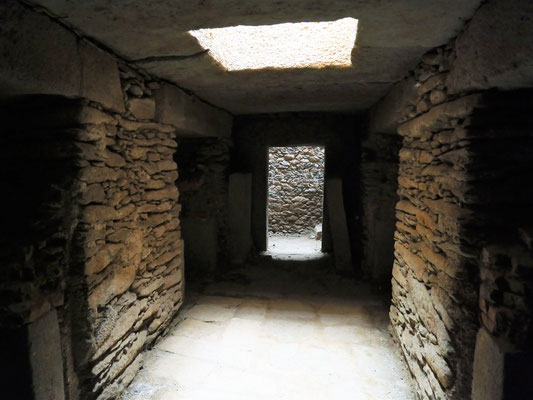 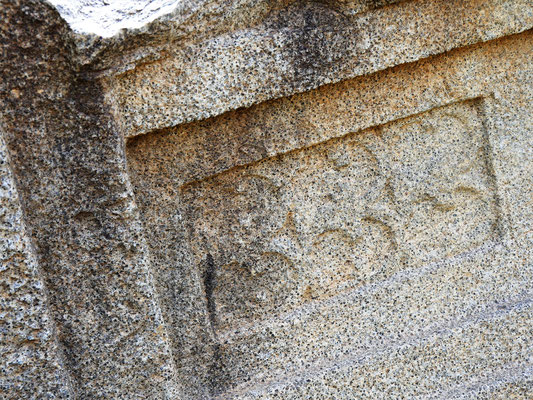 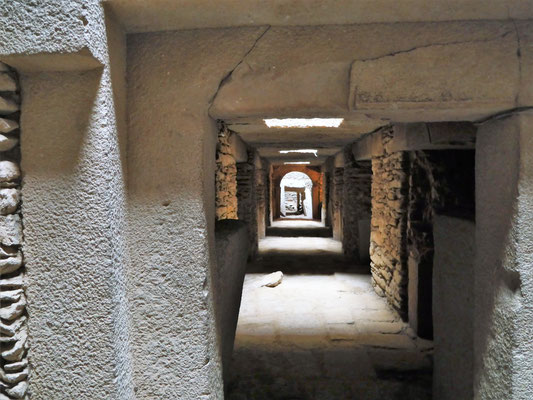 The Axumite Empire (1st to 10th centuries CE) reached its zenith between the 4th and 7th centuries CE and ruled over most of modern northern Ethiopia, Eritrea, Yemen (including Sheba and Himyar), parts of southern Saudi Arabia and northern Sudan (including Kush and Beja). The Persian prophet Mani (3rd century CE) named the four greatest powers of the world as Rome, Persia, Axum and China. Axum had its own coinage and Ge'ez, its own script and language. It was the second polity to formally adopt christianity (the first being Armenia) around 333 CE after the conversion of Ezana (baptized Abreha, meaning he illuminated). The rise of Islam in the 7th century CE across the sea and in the north alienated and weakened Axum. About 970 CE the final blow was delivered by Gudit (Judith) again a Queen, jewish or pagen, from the south whose name is still today remembered in the villages of northern Ethiopia and associated with fire and destruction.

Today it is the religious centre of the Ethiopian Orthodox Tewahedo Church. The site of the oldest church in Ethiopia Our Lady Mary of Zion (Tsion Maryam) and  the Chapel of the Tablet where the Arc of the Covenant is jealously guarded. 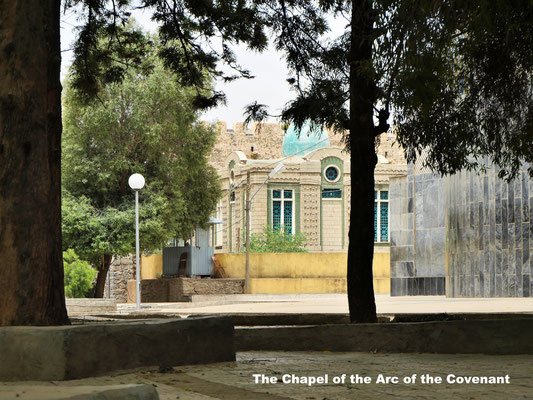 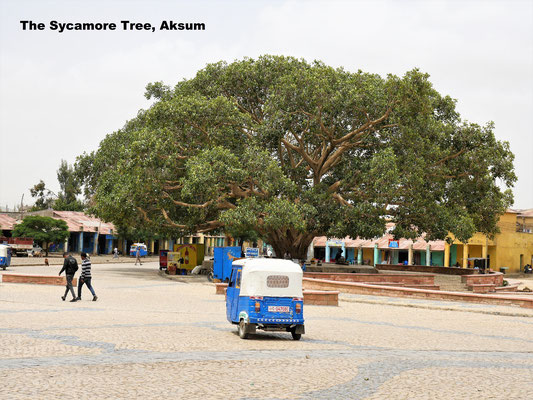 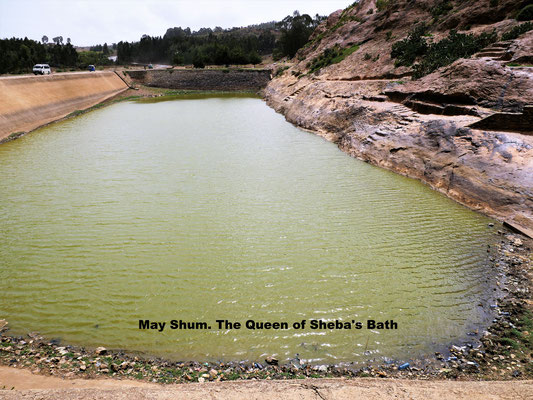