Mickey, the landlord of Pension Everlasting, remained resolute. He knew what we would have to pay elsewhere for the night, that his pension was the cheapest and that everyone has to spend the night in Debark when heading for the Simien Mountains. 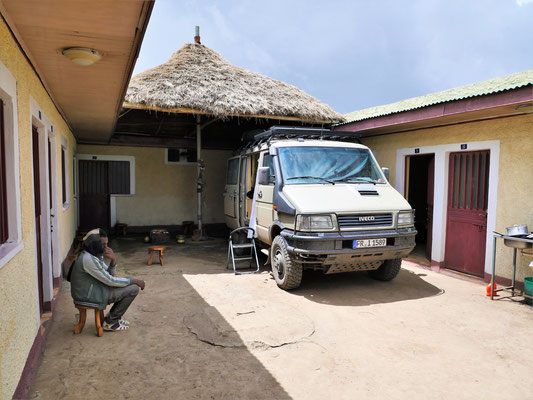 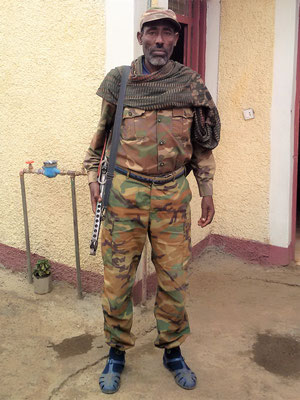 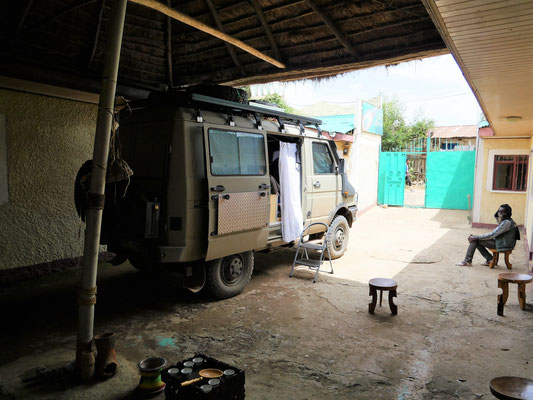 After a short negotiation the result was that we could sleep in our van in his courtyard and use a toilet and a shower. No hot water, no wi-fi, and at the moment no power in town, “perhaps this evening”. We had no choice and nonetheless had to pay 350 Birr. At least the van was enclosed and we were guarded.

Mickey explained where the booking office was and we settled there for a tour which would take three days. The entrance fee was 100 Birr each per day and 20 Birr for the van. A guide is compulsory, 500 Birr, as is an armed scout, 400 Birr.

The next morning Yalo, our guide arrived with the scout whose name I’ve unfortunately forgotten and we drove to Sankaber Camp (3240 meters above sea level) which proved to be very demanding in places for the van especially considering the the extra weight of our new companions. On the way we saw  Clipspringer, Buschbuck and many Geladas and stopped several times to enjoy the spectacular scenery. Allthough overcast the view was breathtaking. 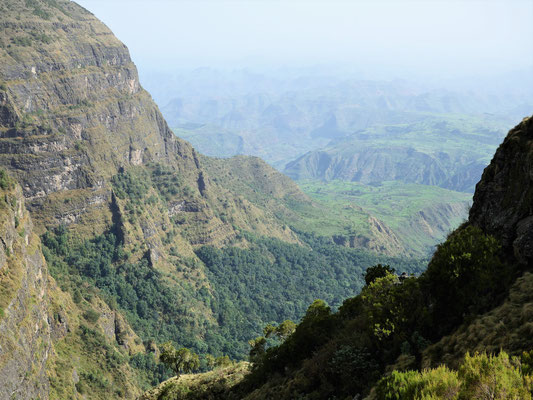 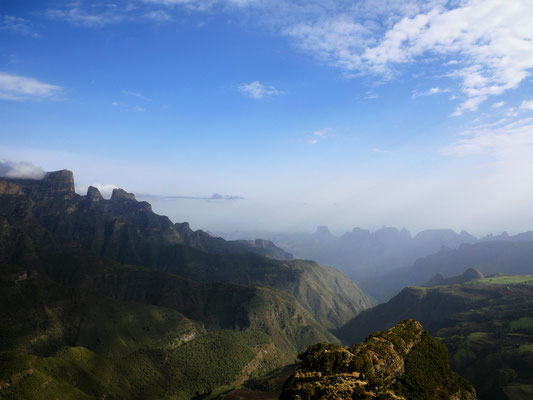 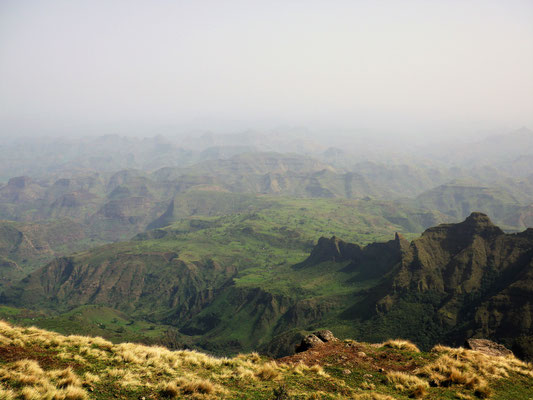 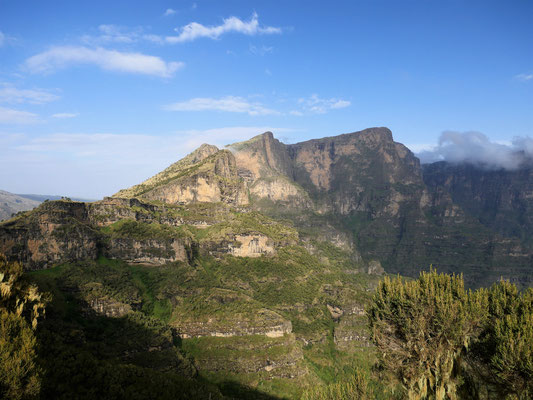 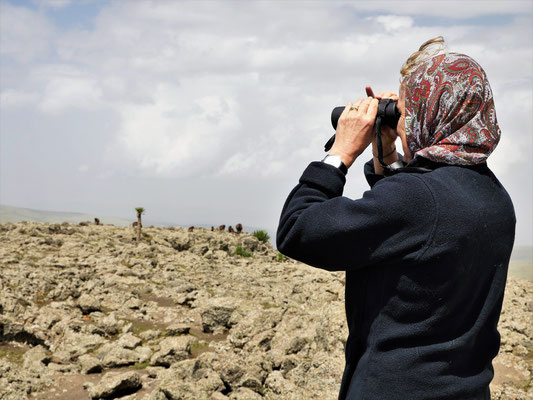 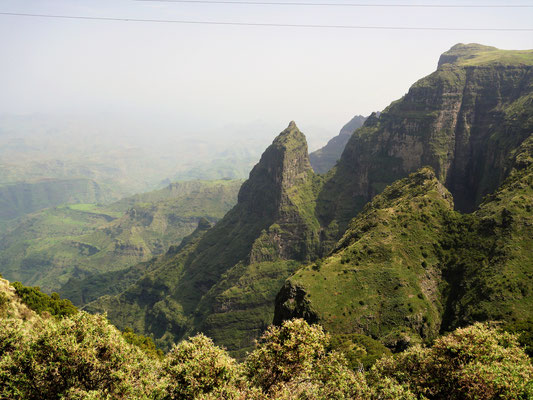 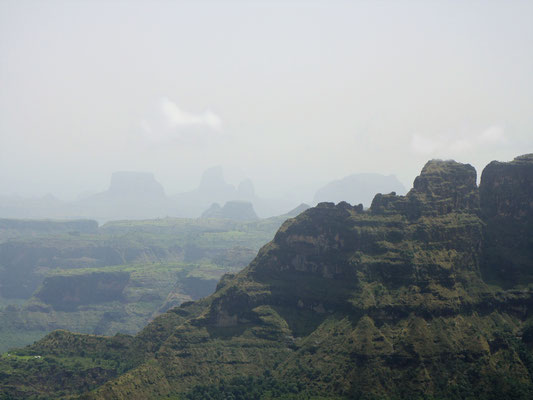 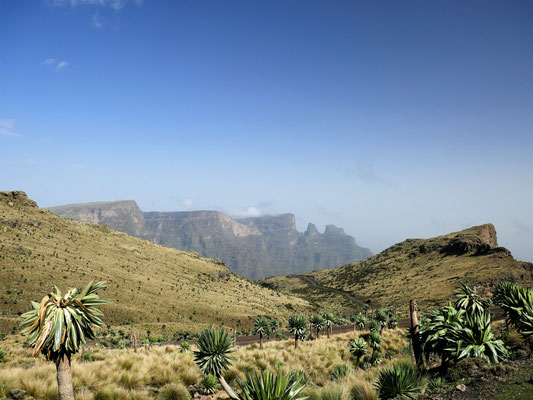 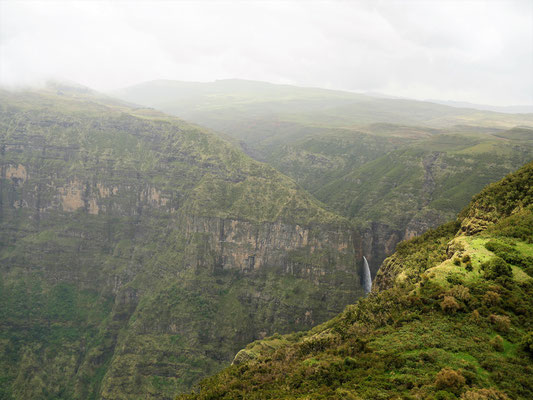 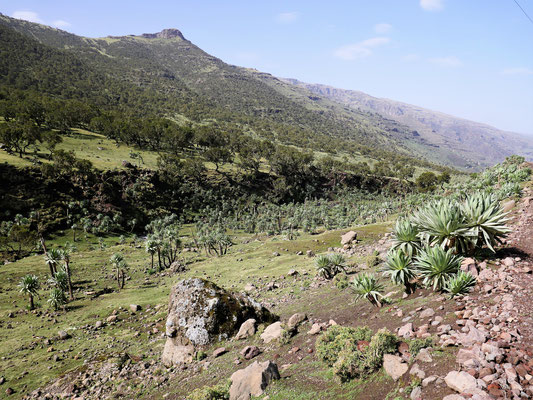 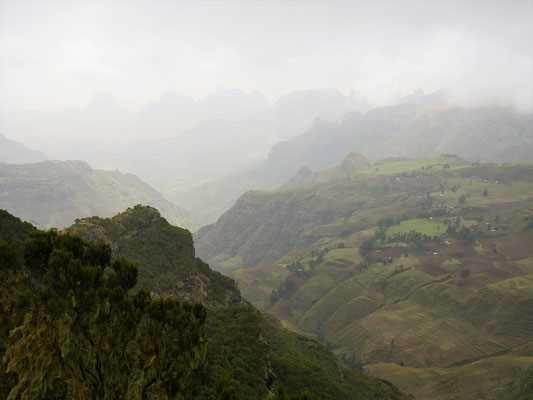 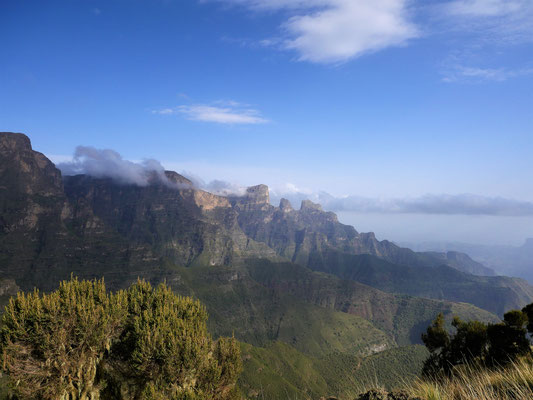 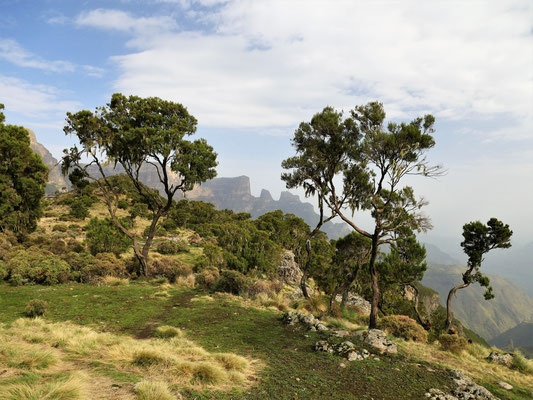 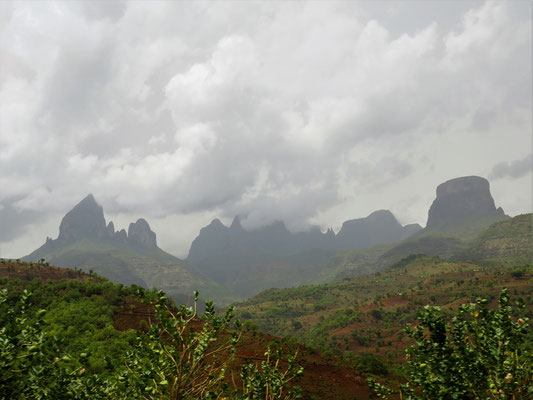 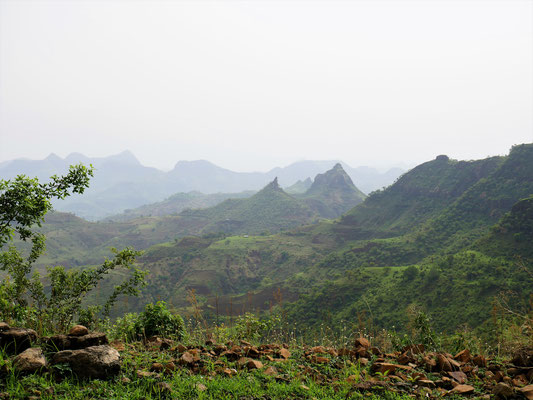 In Sankaber we then had to pay another 200 Birr parking fee which obviously wasn’t official but which Yalo strongly advised us to accept and departed on our first walk to the Jinbar Waterfall supposedly the highest in Ethiopia. Three and a half hours later and very tired we were back in the campsite where a number of tents had been erected and where backpackers who had walked the whole day were getting themselves sorted for the evening. Later it rained. We cooked inside the van (spaghetti and tomato sauce, once again). Yalo slept in one of the huts together with other guides and our scout slept next to the van under his cloak and an umbrella. 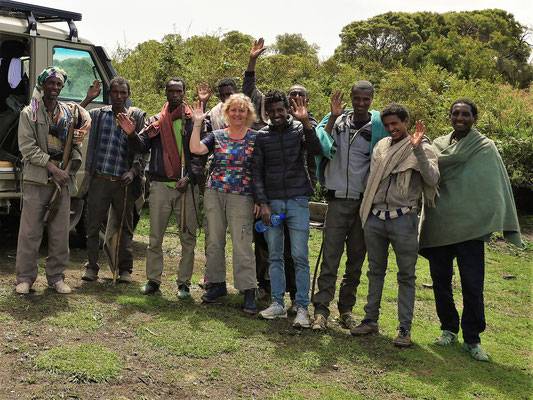 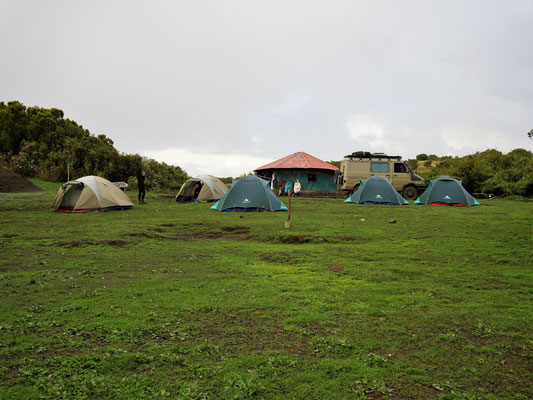 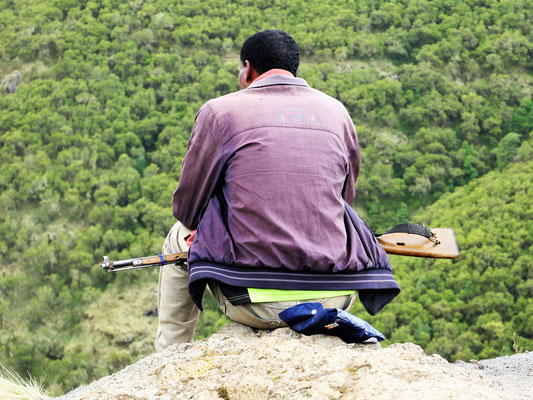 The following morning we drove to a spot beneath Mount Bwahit the second highest summit in the Simiens and the highest our Iveco has ever been at just over 4000 meters. The scout then remained with the van whilst Yalo walked with us to the summit (4430 meters). The going was slow and the air thin. The weather was good and at the summit we were shown Ras Dashen in the distance, the highest peak in Ethiopia, 4533 meters high. We saw no Ethiopian Wolf but were compensated with a small group of grazing Ibex and of course plenty of Geladas. 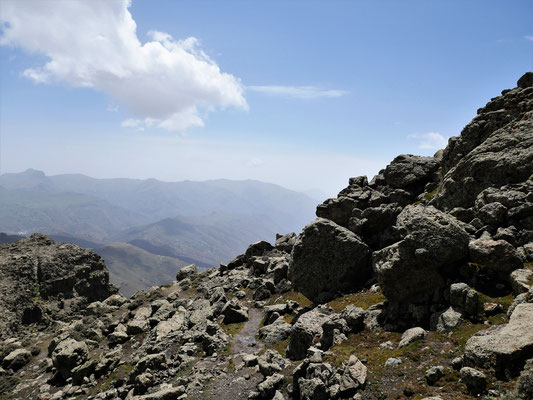 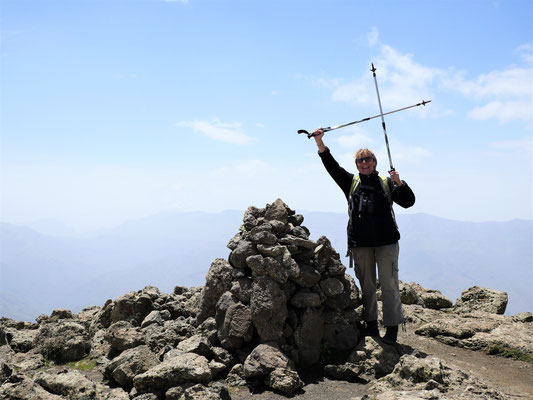 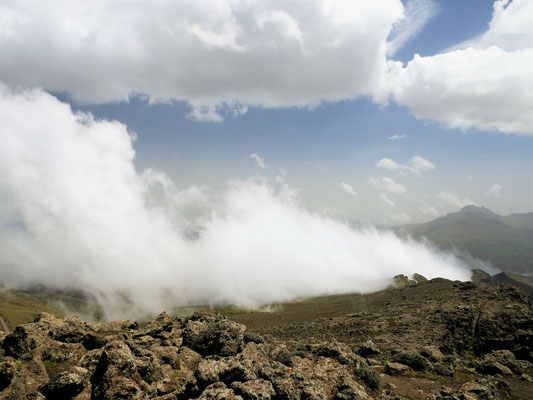 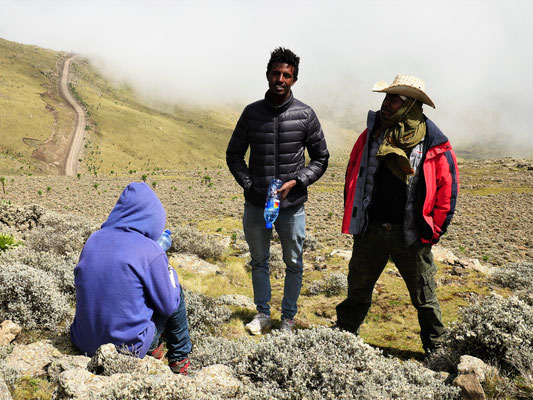 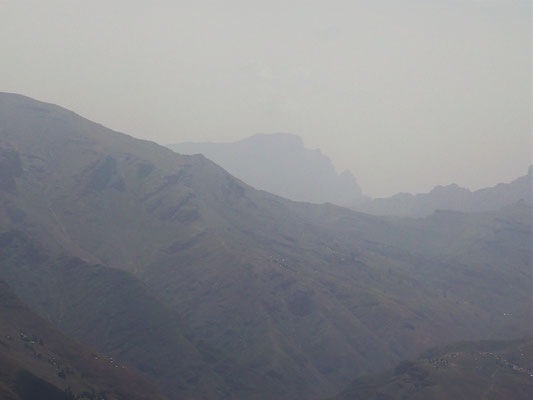 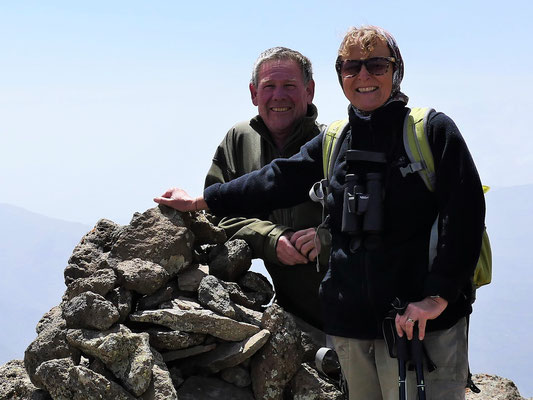 Two and a half hours later we got back to the van and drove down to next campsite at Chennek (3620 meters) and a well deserved beer. I would have had any brand, but they even had St George. We then settled down to our spaghetti and  tomato sauce, a boiled egg each and another St Georg. Yalo settled down in the storage shack next to the inn where there was a fire. Our scout settled down beneath his umbrella opposite the sliding door of the van. It then began to rain again. 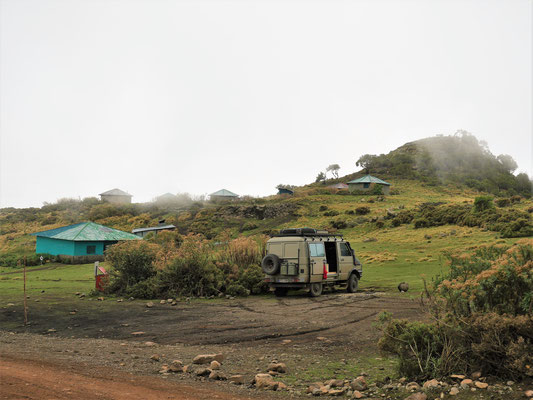 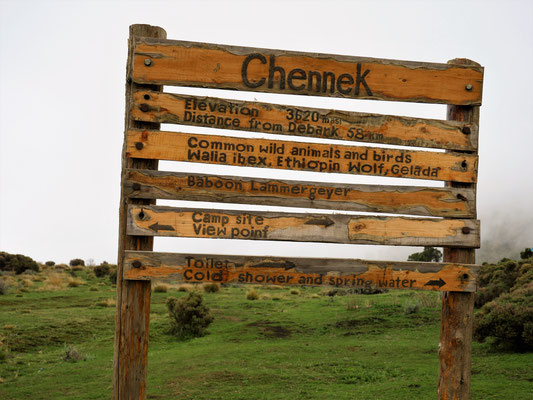 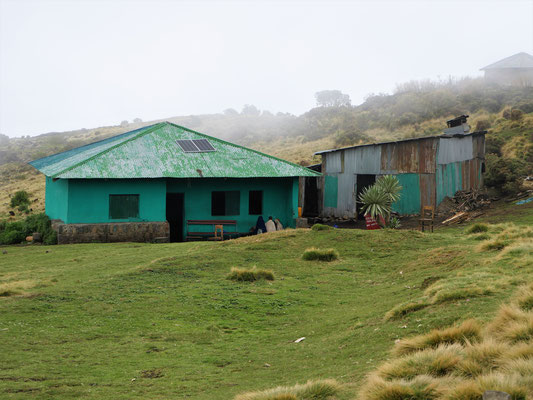 The sky was crisp and clear in the morning. After a short walk we drove back to Debark where we spent another night at Mickeys’ and then drove out of the Simiens using the Limalimo, a picturesque road built by the Italiens during the occupation, towards Axum.