The Afar Triangle is situated at the northen end of the Great Rift Valley, bordered northeast by the Red Sea, southeast by the Somali Plate and northwest by the Ethiopian Highlands. Within it along the Ertrean border in the north is one of the deepest and hottest places on earth, the Danakil.

We had booked a tag along trip of four days into the Danakil with Ethio Travel and Tours in Mekele. Unfortunately the night before we were due to set off, I discovered that the differential seal to the cardan shaft was leaking. The next morning we spoke to Abeba the manager at ETT about it and asked her if we could leave the van here and go with the other backpackers in the Toyotas. We could and the surcharge would only be another 50 USD (42,50 EUR). Of course we immediately agreed and the hotel manager even allowed us to leave the van in their guarded car park whilst we were away, free of charge.

Departure was at 9,30. We were in car number 5 the last in the convoy. Another 4 would be joining us later. Our driver Manuel was a very pleasant person. We got along extremely well with him. We then drove to Berhale where we had lunch, tomato and vegetable stew with noodles. With us in the car was an American, JC, and Biu from Hong Kong an original character who had been everywhere and knew everything. He has been travelling for years together with his collapsible bicycle which had to come with us, much to Manuel's consternation as he had to get it on and off the roof rack at every camp, and a collapsible guitar which he couldn't play, bless him.

After lunch we drove to Dodom at the foot of the Erta Ale. On the way I was allowed a turn for half an hour or so at the steering wheel which wasn’t appreciated by Manuel’s colleges. This volcano is one of only six in the world that have an open lava lake. Here we had a light evening meal and preparations were made and briefings given for the hike to the crater rim camp. At 7 we set off and 3,5 hours later we arrived at the edge of the caldera. It was full moon. In the distance a dark red glow illuminated the whole crater and a deep rolling rumble tremored the ground. A short rest and then we descended into the caldera and across to the open crater. The sulfur fumes were biting and despite a scarf around my face, breathing was difficult. The brittle lava in the caldera crackled under my feet and I became goose pimples. At the edge of the crater seeing the lava churn beneath me was so scary that I was almost glad as half an hour later we made our way back to the rim camp. The whole experience was so intense that I had no mind for photos. Back in camp thin matrasses lay in small groups upon the ground and everyone was given a bottle of water. We sat down, took our boots off and tried to find some sleep. Appel was at 4,30.

I barely had 2 hours sleep. By the time the Chinese had finished their murmuring we had two snorers, one farther off, the other, Biu, next to me. A healthy shove now and again brought little respite. At least Sig slept better. At 4,30  we were woken and given wafers and water. Then once again for half an hour or so down to the crater and back and thence chased down the hill in the same fashion as we had been chased up. The pace was far too fast and at times we were almost running (the Chinese had it better, they had Camels). All for  the sake of security. "You must stay together". A German who had apparently distanced himself from the group in 2015 had been shot by Eritreans. No one seemed to consider slowing down those in front though. Meanwhile the sun had risen and three hours later we were in Dodom . The way back, downhill and by daylight, was much easier.  Manuel had a bottle of mango juice for each of us and a bottle of water for a shower, very considerate and then we had breakfast, scrambled egg and watermelon.

Lake Afdera is a salt lake 100 meters below sea level. It wasn’t far and the drive there flew by. Doing something for the first time is allways special and swimming in a salt lake was no exepion. Not 10 meters away is a natural sweet water hot spring to bath in and take off the salt. Pure luxury. That night we slept in Abaala in a pension. It had a courtyard leading to two dormitory rooms each with eight matrasses on the floor. Across the courtyard was a French latrine and next to it a cold shower. We were just two cars that evening in our group, the Chinese went back to their five star etablisément for the night and the others went somewhere else. ETT has a number of groups on different tours at the same time and mix the groups from time to time and so there is allways someone new to talk to. In the other car was a couple from Israel and The Netherlands who had just met one another, Judith from Spain and an Ethiopian girl. After dinner (injera, shiro and goat) Sig, JC, Biu and I went to a guesthouse round the corner and watched Germany lose against South Korea in the football world cup together with a handful of the locals. The dormitory doors were left open yet it was so hot that night  that Biu slept in the courtyard with some of the household. Unfortunately JC snores too. At about 4 a.m. JC and the couple left to drive back to Mekele as they had booked the three day trip. Another short night.

In the morning we had to wait for the Chinese to join us and following breakfast (scrambled egg and watermelon) spent the time chatting with Judith. Eventually the Chinese arrived. They had been to Dallol yesterday afternoon. Manuel who had spoken to their drivers told us that the heat had been  too much for them and after venturing forth a few meters into the sun they all, believe it or not,  turned around and climbed back into their air conditioned cars !!! Why were they there??? Biu who was very adamant about the fact that he came from Hong Kong and wasn’t Chinese told us that they were all members of “The King’s Family” in other words party members, civil servants, the privileged and  the such like.

At last we set off to Ragad (Asebo) where in contrast to the modern mine at Lake Afdera, the salt is worked by hand. On the way we had tomato and vegetable stew with noodles, again. At the mine no one was there but we would be coming this way tomorrow and therefore carried on to The Holy Mountain, an outcrop of red salt in the middle of an otherwise white pan. The red salt works wonders, whether headache or impotency. It is very expensive and only a sole person owns the right to sell salt from it. We were then taken to a 2 by 2 meter hole where one of the drivers had to show off a little for the girls. He had a crate or two of beer in his car and perhaps something else. He wanted 50 Birr a bottle !!!. Of course he sold some (not to me) and went to lie in the pool with his customers much to the delight of the girls. It all seemed a little weird, even more so as we then drove a few miles into the pan and there had a beach party !!! very strange. I think they had screwed up the agenda and had to improvise a little.

As nightfall came we drove to Hamede Ela (on the roofrack) where we ate and were to sleep. Biu played a few pieces out of his repetoire until compelled to stop out of consideration for those who had already bedded themselves. Judith nearly split her sides. We had had 50°C during the day and slept under the stars in our underwear on makeshift beds and our matrasses from the roofracks. Manuel had a liter of water to drink and for sig and myself, an extra bottle each for a shower.

The next day and our last, things seemed better organised. Once again scrambled egg and watermelon. We then helped Manuel load the roof rack for the last time including Biu’s bike (Biu was nowhere to be seen, and then set off, back to the salt workers and saw the Camel caravan´that transports the salt to Market. It is of low quality and used agriculturally. Then went to what was to be the second highlight of the trip, Dallol. 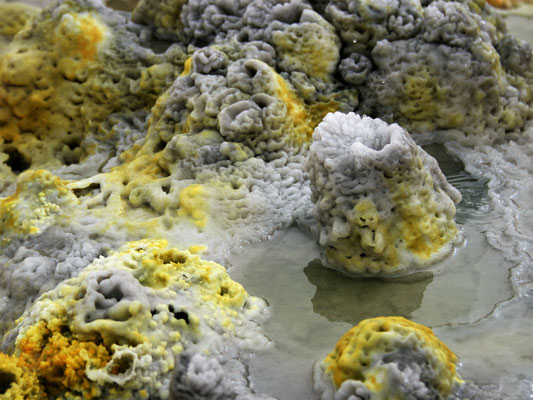 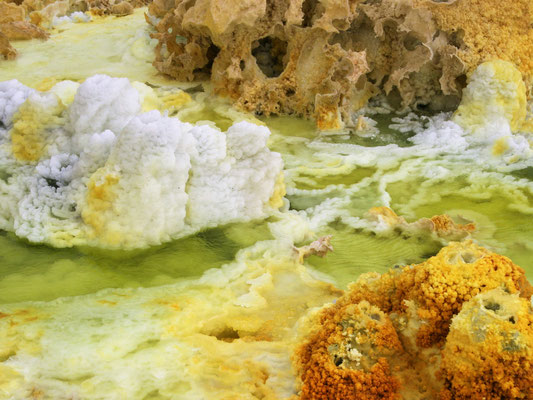 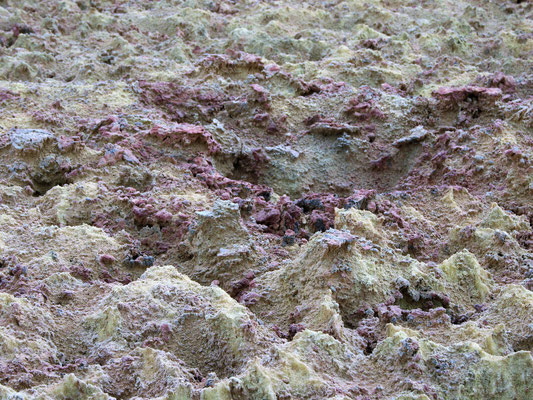 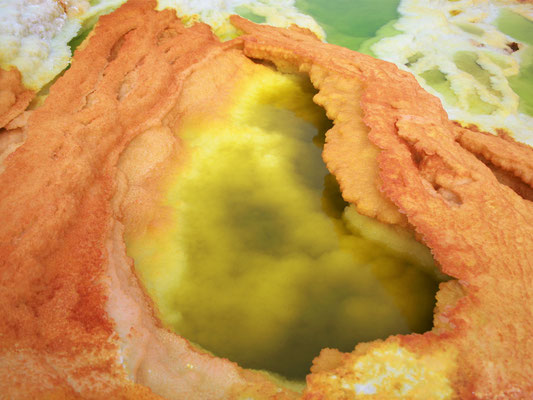 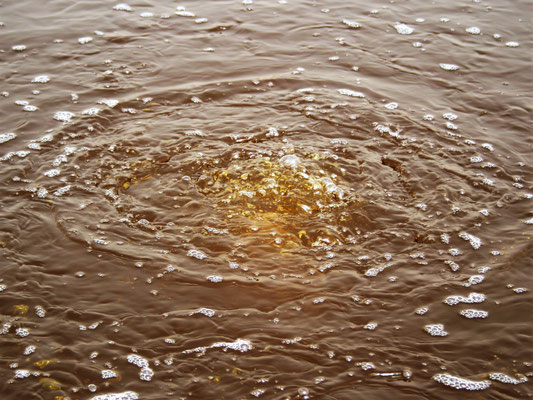 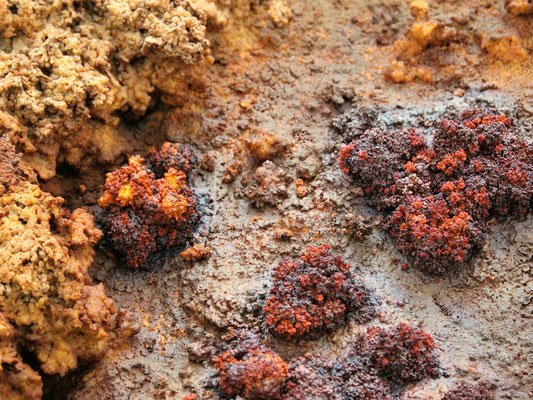 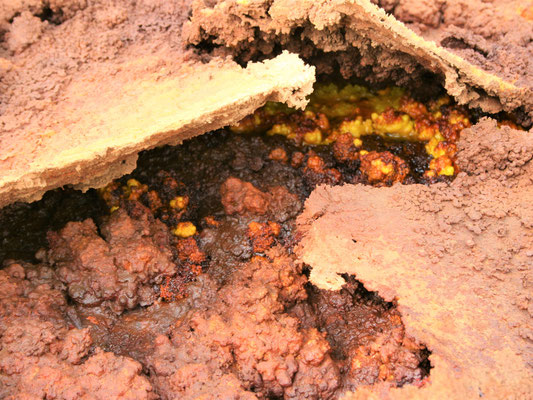 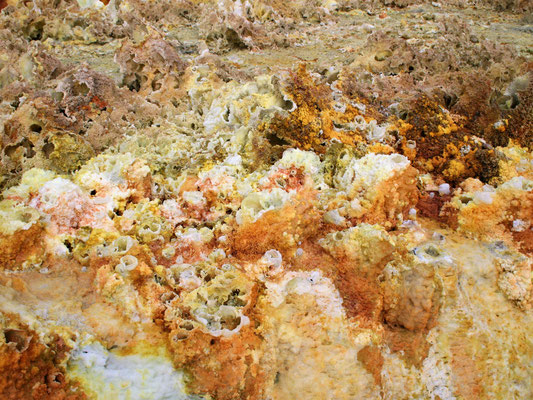 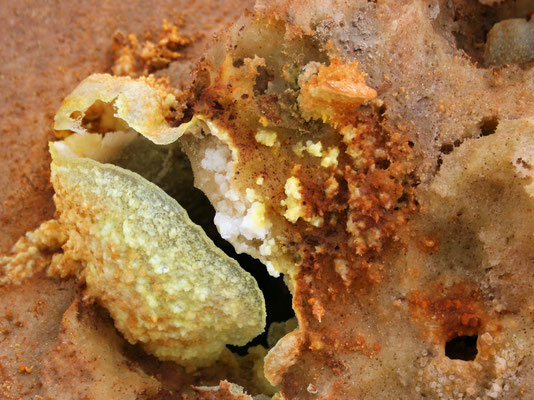 A fairy tale landscape of hissing, bubling and broiling, where pure sulfuric acid  was spat and spewed out of bizaare spouts and formed intriguing puddles and pools of every colour and hue. A few hours later it was all over and we were on our way back to Mekele. We made a short stop at a formation called New York. Manuel had to unload Biu’s bike again and Biu rode a few yards up and down and found a victim or two to take fotos of himself and his bike. After lunch we said goodbye to Judith with whom we had had a lovely time. She and some others were going to Addis. We then went to Mekele where we made a date with Manuel for the next morning to properly say goodbye. We would be there as Abeba had kindly offered to have someone show us the way to the ETT mechanic and have the differential seal looked at. Biu had meanwhile made an Irish farewell and was nowhere to be seen.