We chose the Qustal / Eshkeet crossing to enter the Sudan. That would envolve driving 280 kilometers or so to Abu Simbel (including snatching a glance at some more dead stones) and taking a ferry across lake Nasser from the west to the east coast about 10 km southerly. The border is another 35 kilometers south of the landing point. There is nothing there except an Egyptian and a Sudanese compound. The next settlement is Wadi Halfa 30 km further south. It was going to be a long day.

At 2,30 a.m. the alarm clock woke us and at 3 we went downstaires. David was sitting with his children outside eating ice cream and waiting to say goodbye again. Arabic hip hop thumped out of the kiosk down the road and in front of it, under the flickering bling bling of multi colourd light chains a bunch of young men amidst their scooters enjoyed their lemonade. At the corner shop a family bought groceries, neighbours exchanged the latest and a delivery van was being unloaded. Ramadan certainly is a special season. We all said our goodbyes and set off for the Sudan.

We learnt from David where the fuel Station was where the convoys heading for Abu Simbel met before driving through the last checkpoint in Aswan. Apparently for tourists an escorted convoy leaves at 3 a.m. whether or not that's true David could'nt say, neither can I. We opted to drive to the station and when they open the road which is at 4 a.m. intended to tag along with the other lorries and buses that were waiting there.

We arrived at the station about five past four and allthough a lot of traffic was there nobody seemed in a hurry to leave. About 4,30 two buses set off and we joined them. At the checkpoint, the policeman was obviously used to tourists and was friendly. We were asked the usual stuff and told that the road is open. an hour or so later the Sun rose and shortly after 8 o'clock we were in Abu Simbel. 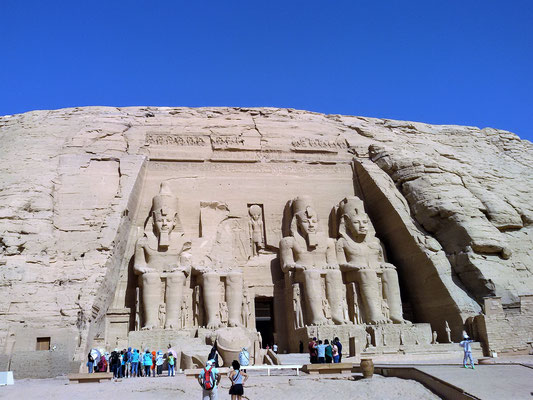 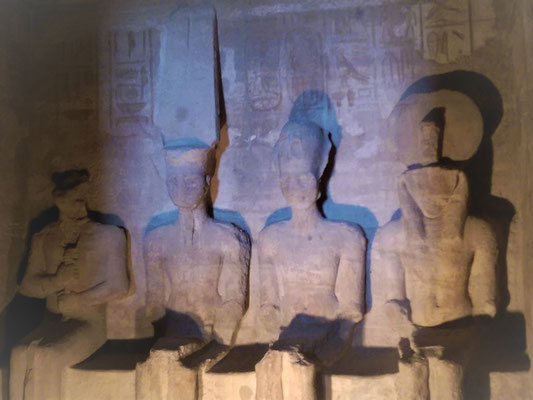 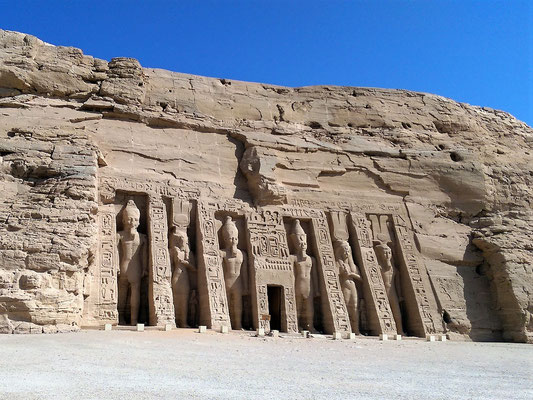 The route via ferry from Abu Simbel seemed to be the most practicable. Most of it could be done by road, the ferry crossing was short and we could remain with the van. There is a ferry service from Aswan to Wadi Halfa but vehicles and passengers have to travel separatly and the whole procedure takes several days. Whether or not it still exists i cannot say. Recently at Argeen a border crossing opened, which we considered a while but could'nt find enough information about it. The next bridge across the Nile is in Dungula.

After some compulsory sight seing we drove to the port entrance which is not far away. As we arrived a Sudanese bus came and we both parked in front of the closed gates. A guard came and spoke to the bus driver who then told me that because of strong winds no services are being offered today. His english was very good and he told us about another port not far away where smaller ferries are working, that he was going to try his luck there and that we could follow if we wished which we did.

At the small port a lot was going on. Two dozen HGVs were lined up and half a dozen more were being conducted into position. As soon as we arrived we were shown a number of places to park by various people and after maneuvering back and forth for a spell everyone seemed for the time being to be fairly satisfied. We're not quite sure, but the guy in the white shirt was probably the boss and another in a blue and yellow striped sweater his adjutant. A ferry was being boarded and we were given to understand that we would be on the next one in an hour or two. In the meantime we had a glas or two of Karkadeh in the cafe opposite and enjoyed the organized chaos over the road.

By the time our turn came I had sussed out who was to be adhered to and who was making a lot of wind. The voyage over the lake was quick and the conditions were'nt rough at all. The ticket costed 100 LE and after disembarkment a deckhand is sent round to collect the capitains backsheesh in our case another 20 LE.

The landing point, like the quay where we started, had no moorings. The road had simply been bulldozerd into the lake at about the height of the ships ramp. Whilst disembarking the engine runs and the ferry pushes itsef againt the shore. On land the lorries were queued. Onions and cattle seemed to be the main commodities. Soon we arrived at the Egyptian compound. It was now exactly ten past two.

At the gate we had to wait a little. A huge argument was going on between a policeman or a soldier (I still can't differentiate between the two, they all look equally martial and there are at least a handfull of uniform varieties and another handfull camouflage patterns to confuse the issue) and a civilian. Another two or three on each side were busy reconciling their counterparts whilst others were arguing either with them or with themselves. Everyone within range upon hearing the commotion was distracted and had to watch. After a few hefty minutes it had died down as fast as it had begun and the guys at the gate turned their attention to us.

We were required to hand over our passports and 360 LE. Half an hour later he returned with our passports, port passes, and opened the gate and waved in the direction which we were probably supposed to take. A lot of guessing has to be done in such situations. Only the higher ranks speak a few lines of english when unavoidable, the guys with the guns are usually cheeky, grin like silly little girls or very friendly and simply do their job. It's hard to tell what you're going to get. On one occasion (at the Aswan high damm) I was even indirectly urged to bribe a young boy with a rifle who could'nt stop grinning (a dead givaway) and was trying to convince me that the jerry cans on the back of the truck were'nt allowed. I told him that he was being silly and that he should fetch his superior and went and sat back in the car, which wiped the grin from his stupid face. Soon after we of course drove away without bribing and with our jerry cans.

Another guy waved us down after 20 meters or so, where we had to park and open the doors. He gazed around, nodding to himself knowledgeably whilst doing so, tapped on our backpacks and pointed to a building next to us. I walked inside and saw the x-ray scanner, ahaa.

Sig stayed with the car whilst I carted three or four rucksacks and bags to and fro. Our pistols, hand grenades and explosives I left stashed away together with the half automatic under the bed. In the next building they needed photocopies of almost everything we had including the confirmation from Aswan and were obviously quite relieved as I produced it. I had read that people who had'nt had it were sent back to Aswan!!  I concluded that this must have been the traffic police buildings. Customs, or at least a sub division of it seemed to be there too.

We had decided to manage the clearance ourselves. I had read reports of others who had done it and was therefore a little prepared.It seemed a lot easier than in Alexandria and would save us the expence and time of having to organize a fixer in Aswan. Just in case I had a phone number with me. After all we were no different than the others there, lorry drivers and bus passengers, trying to get from A to B. The officials all know what you want, it's all about showing the right documents to the right people in the right order at the right time and paying. Gesture is an internationally understood form of communication and I got by with it and a few words in English. When nothing else helped shrugging and just standing there looking back at them did the trick and someone would help.

At the copy shop he wanted 50 LE and we finally agreed at 20. During that afternoon I had to repeatedly go back and have more copies done. Asked for money I told them I had that morning made a 50 LE lump sum payment for all necessary Photocopies at which they were satisfied.

Back in the police-customs office I handed over the photocopies and was taken to the next building where the carnet was inspected. I then had to get more photocopies and upon returning was given a bill, had to go to elsewhere and pay a stamp fee, brought him the reciept and had the carnet stamped after a further inspetion of it and a walk to the van.

Back again in the police-customs office someone was sent with me back to the van where the chassis number was indecipherably traced with paper and pencil. I was then sent with it to the photocopy shop !! Next I was instructed to take the Egyptian number plates off and give them back. A bill was produced and off I went to pay.

It was now late afternoon we were the last customer in the compound. We were then accompanied to the immegration counter in the next building which was closed but where they were prepared to make an exception in our case. I shrugged my shoulders as usual and he stopped grinning. I had all the time in the world. A stamp could'nt be found and we had to walk with two guys back to the compound entrance and pay a couple of pennies for the stamp which had probably been overseen as we entered due to the argument they were having.

They had forgotten to take our passports with them and had left them in the immegration office. One of the guys had to run back and fetch them (yes, he actually ran). On the way back to the immegration office one of them asked why we came so late in the day and I asked why were we let in if it was too late. I did'nt get an answer. They were getting pretty nervous, obviously knocking off time was approaching.

Back in the immegration office our passports were stamped without a word. Outside the two guys pointed to the exit, turned round and walked off without a word. They were glad to be rid of us, the poor souls. It was now twenty to five. We strolled back to the van and at the exit gate were asked the usual silly questions. "your name?" "where you go?" "where you from?". Once again looky looky in the back of the van (luckily our arsenal was'nt discovered) and we were released into no mans land.

The Sudanese  compound was of course closed and we had to spend the night next to the gate with the lorry drivers who had'nt made it either. At least we were'nt alone. 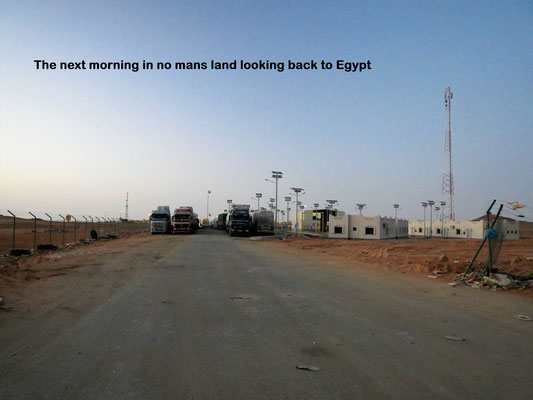 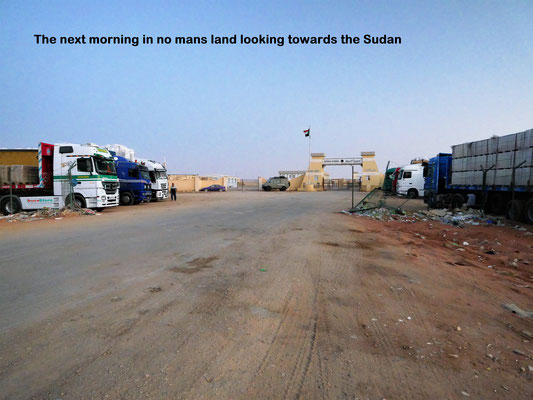